Usually, the treatment of bone sarcomas includes several types of therapy. It is therefore necessary, that the treatment strategy and decision is discussed and taken among a so-called multidisciplinary team of medical and radiation oncologists, surgeons, radiologists and experts from other disciplines if necessary.

The treatment strategy depends on different aspects: type of bone cancer, stage of disease (localized = tumour is limited to the primary location vs. metastatic disease = has already spread to other organs) and general health status of the patient. Patients may face choices, including entry into a clinical trial, and will probably need detailed information from the treatment team. 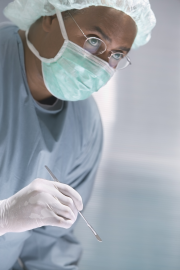 difficult if it is located in a limb (arm or leg). An amputation may be considered if removing all of the cancer requires removing essential nerves, arteries, or muscles that would leave the limb without good function. However, nowadays, a complete amputation ? removal of a part or all of a limb ? is rare. Specialized surgeons will aim to avoid amputation and conduct so-called limb-salvage or limb-sparing surgery, which removes the cancer but leaves a working arm or leg. Artificial bones (endoprosthetics) are increasingly used to replace bones damaged by tumours. In children there are techniques which allow endoprosthetic bones to be extended to match natural growth. Some of these techniques are non-invasive, i.e. they do not involve further surgery. More than 90 % of bone cancer patients with a limb affected are able to have their limb spared.

For tumours in other places such as pelvis or jaw, the removed bone will be replaced by either bone grafts or bones from other parts of the body. It is hoped in future that computer 3D printing may help surgeons by providing artificial bone replacements but this is still an idea. In parts of the body where bone replacement is difficult, e.g. in the skull, additional local treatments might be applied, among them curettage (scooping out the tumour without removing the bone), cryosurgery (killing cancer cells with extreme cold using liquid nitrogen) and bone cement (a liquid that hardens over time, giving off a lot of heat which helps kill any remaining tumour cells e.g. after curettage).

Surgery is also an option in metastasized disease. Especially in the lung (most common site of bone cancer metastasis), surgeons might be able to remove all metastasis. However, this has to be carefully planned and depends on a range of factors which includes site, number and size of metastases, rate of growth, duration of disease and the patient?s age and general health.

Radiation therapy is applied regionally or locally to destroy tumour tissue. However, most bone cancers (apart from Ewing sarcomas) are not very sensitive to radiation. That is why radiation is preferably a major treatment option for Ewing?s sarcoma.

Radiation therapy in bone cancers may be considered before or after surgical treatment (most common in bone sarcomas): Before surgery (neoadjuvant treatment) it may be used to try to shrink a large tumour until it is possible to remove it completely without an amputation. During surgery, trials have been conducted involving removal of a bone with a small tumour, intensive single-dose radiation treatment of the bone, and the bone being replaced in the patient. After surgery (adjuvant treatment) it aims at avoiding either local or regional recurrences, which may develop from microscopic cells left over after surgery, or at destroying adjacent lesions that could not be surgically removed. Rarely, it may be performed instead of surgery to achieve local control of the tumour although this is a palliative approach.

Ewing?s sarcoma presents many challenges for radiotherapy oncologists when tumours are on or in the body. Pelvic radiotherapy has a high morbidity and can result in loss of fertility in women and other side effects for all patients. To avoid this there is growing use of proton beam therapy to treat young women and preserve fertility. As there are very few proton beam facilities in Europe at present this involves extensive co-ordination, travel and costs.

Unlike radiotherapy or surgery which are localized therapies, chemotherapy is a so-called systemic treatment: It is applied into the bloodstream and affects the whole body.

For osteosarcoma and some of the less common bone sarcomas neo-adjuvant chemotherapy is used as an induction treatment prior to surgery. The aim is to kill the tumour. The degree of necrosis (tumour cell death) which has been achieved can be assessed by the pathologist following surgery and is a good prognostic indicator. Further chemotherapy will be given adjuvant to surgery as this has been shown in clinical trials to lead to the best chance of a cure.

In Ewing?s sarcoma chemotherapy is usually given before and after surgery, sometimes in combination with radiotherapy. However, chordoma and giant cell tumours of the bone do not respond well to chemotherapy and it is also mostly not considered for localized chondrosarcomas.

In some types of bone cancer, targeted drugs might be beneficial. These new agents inhibit tumour growth. Among them are Imatinib in advanced chordoma and Denosumab in recurrent or non-resectable giant cell tumours. However, none of these drugs is approved by the FDA (Food and Drug Administration, USA) or the EMA (European Medicines Agency) for these types of cancer and they usually have to be applied ?off-label? where this is permitted. Further new approaches are currently tested in (early) clinical trials.