Bone sarcomas, also called primary bone tumours are very rare. They make up about <0.2 % of 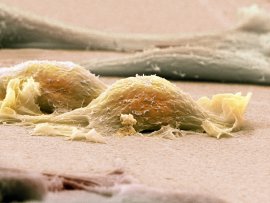 all malignant tumours, although the numbers vary country by country. As the name implies, malignant bone tumours are found throughout the bones of the body, but also in the cartilage.

Please note: Bone sarcomas are tumours that start in the bone. Metastases of other types of cancer (such as breast or prostate) are bone metastasis, not primary bone cancer, and need to be treated differently.

The causes of bone sarcomas are unknown. However, some risk factors have been identified that might lead to a higher probability of developing bone cancer. Among them are genetic predispositions, Paget?s disease and exposure to radiation.

The rarity of the disease combined with the need for a combination of different therapies make bone sarcomas very difficult to treat correctly. Therefore, please remember: All sarcomas need to be treated by specialists, if possible in specialized centers!